Power Inret R is the original IEC 320 power inlet which is widely used for many types of audio equipment. We pursued to produce the best Inlet on the market. Because it is very simply composed by just a housing and blades, the quality is totally depends on material and method of production.

The housing is made by 30% glass filler PBT which has the quality to durability, vibration absorption, and heat resistance. And because of the wider cable attaching portion, it makes soldering work easier compared to regular power inlet.
The blade is trimmed down from a board made by phosphor bronze. And, after hand polished, it is plated by platinum and palladium plating which is the best combination we thought after repeated tests with prototypes.

Power Inret R contributes truly lossless power transmission. You would be so surprised by this small piece of components.

■ Precision trimming work
The blade of Power Inret R is produced not by press working but by trimming down from a bronze board made by phosphor bronze which has already proved its quality applied for our power receptacles and power plugs.

■ Platinum + Palladium plating
The plating on the blades of Power Inret R is the combination of platinum and palladium which is applied to our premium models such as R1 wall receptacle and M1/F1 power plug/connector. It has proved its superior quality by many feedbacks and reputations from customers. 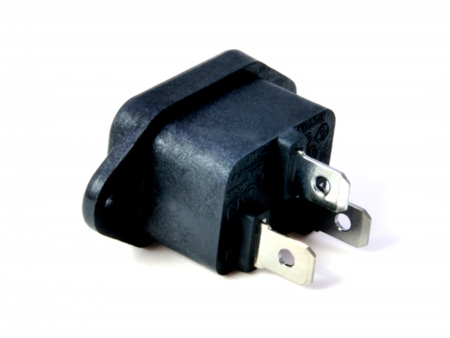