Erys, likewise the whole Excellence series, is made of oxygen-free monocrystalline copper OCC (Ohno Continous Casting) N6. A solid-core copper wire in a dielectric made of fluoro-organic FEP (Teflon) constitutes the main body of this cable. Erys Excellence, in order to eliminate the negative influence of electromagnetic field, is equipped with five screens. Two are made of aluminium foil and three from counter-woven copper braid.

Especially for this cable of large outer diameter, our engineers designed new plugs. The new plugs are silver-plated in the two-stage galvanisation process known from the Ultra Reference Series. The five-screen structure of Erys Excellence allows us to recommend this cable to all the audio systems where an influence of electromagnetic field may cause sonic interferences. Swap your insufficiently-screened cable for this excellent product!

The whole Excellence Series has been designed for the most demanding and advanced audio systems. Each cable has several prototypes tested for electrical correctness in our laboratory and underwent listening tests in our studio. During our open listening sessions on Fridays we approved the seventh prototype as the final version of Erys Excellence.

Erys Excellence provides a great vocal reproduction without an artificial sharpening and colouring, and without sonic distortions. With Erys Excellence you will literally touch the stage. Moreover, the bass is surgically precise and warm at the same time. The sound of the cable is not irritant in its character and thus enables you to enjoy very long listening sessions.

Modification 0.1:
Erys Excellence is of a really successful design,but if there is something which can be improved, we just do it. The modification of the cable involves the application of new golden-plated WBT plugs of greater technical and sonic parameters. The outer shielding of the cable is also changed. The braids of higher density provide a better protection against electromagnetic interferences. Erys Excellence underwent an outer face-lift and in effect the finish is of gold colour.
M1 version is on the market since 1st January 2014. The price of the cable is unchanged.

The whole construction is hand-assembled with attention to details. 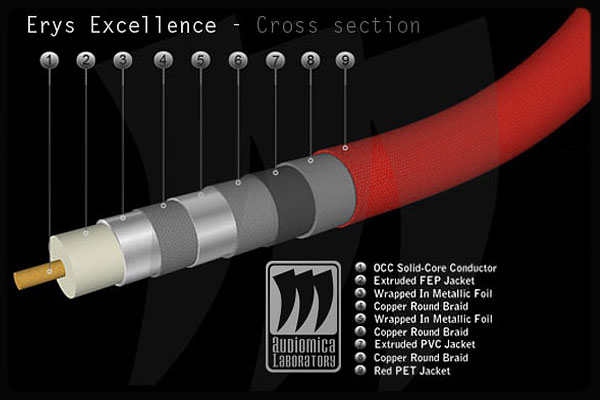 4.84 / 5.00 458 reviews
IdoSell Trusted Reviews
2020-07-13
Fast and safe delivery to Germany! Wonderful and powerful sound even with bluetooth. Fits perfectly on my head, no slipping! Thanks!!!
2020-07-20
Perfect communication. Quick delivery. Great seller +++
View all reviews (458)
This page uses cookie files to provide its services in accordance to Cookies Usage Policy. You can determine conditions of storing or access to cookie files in your web browser.
Close